Everyone wants to make a good first impression. But few of us spend much time thinking about how to make a memorable final impression.

One of LinkedIn’s recruiters was floored when a candidate sent her a thoughtful handwritten thank-you note and two bottles of wine — after he had rejected LinkedIn’s job offer. He sent the hiring manager a note and a bottle of whiskey.

Natalie Lynch-Clark was a senior recruiter in LinkedIn’s Chicago office and she had a senior sales role to fill when she came across a candidate who had top-notch experience. Natalie, who now manages a team of recruiters, found this person to be an exceptional candidate —gracious, thoughtful, and uncharacteristically open and transparent.

He let Natalie know upfront that he was talking to other firms, and then he kept her posted as job offers started to come in. Ultimately, he was considering offers from four companies, including LinkedIn. One of the other opportunities was with a startup, which would allow him to build a sales organization from the ground up.

The candidate’s openness allowed Natalie to serve as both an advisor and a sounding board. Together, they weighed the pros and cons of the pending offers and delved into the risks and rewards of working for a startup.

In the end, he decided the startup offer was worth the associated risks. He called Natalie and explained his decision and made it clear that he wanted to keep the door open at LinkedIn. He followed up with the gifts and thank-you notes.

The gifts were nice but the notes were truly memorable. 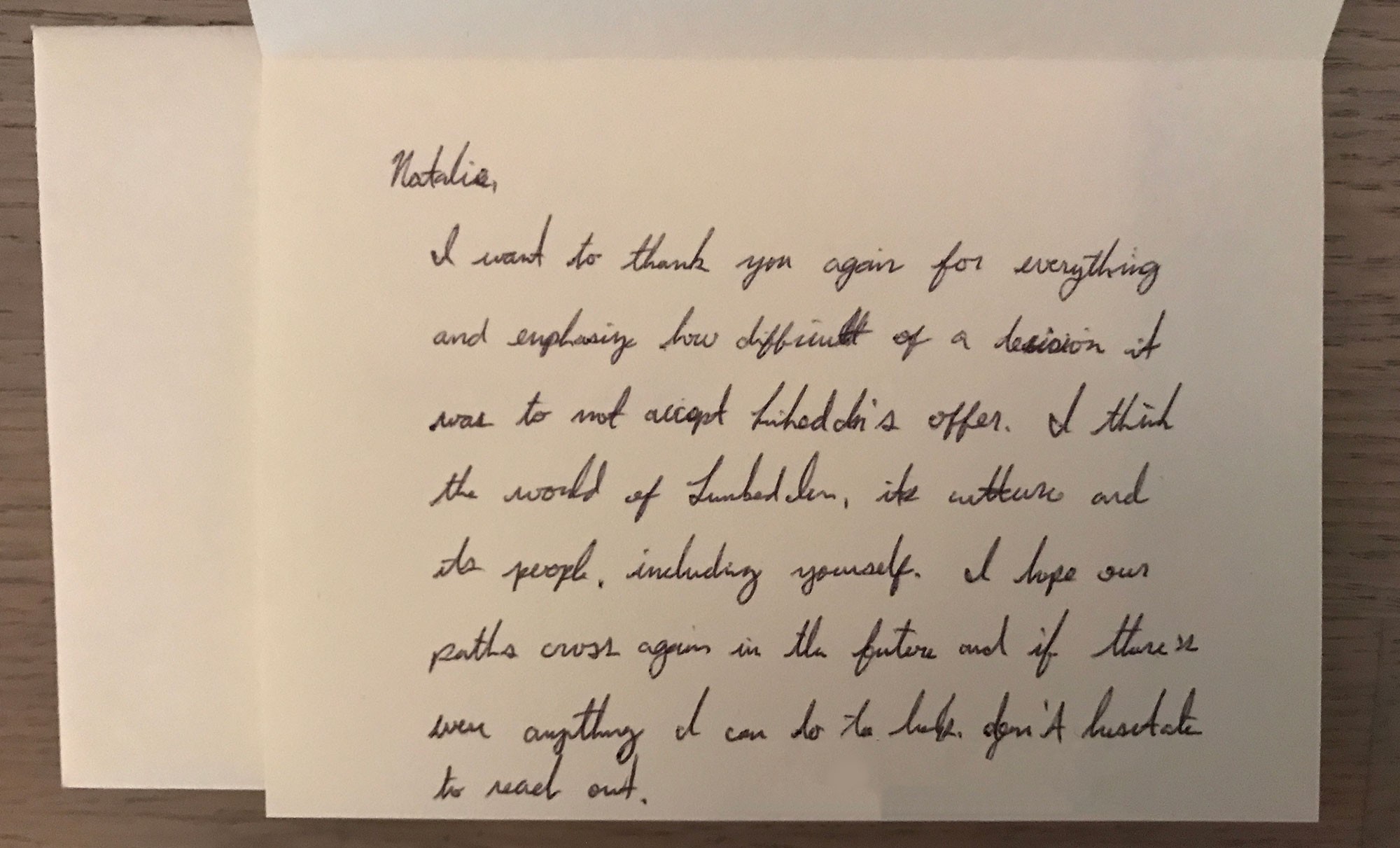 His note to Natalie read:

I want to thank you again for everything and emphasize how difficult of a decision it was to not accept LinkedIn’s offer. I think the world of LinkedIn, its culture, and its people, including yourself. I hope our paths cross again in the future and if there’s ever anything I can do to help, don’t hesitate to reach out.

“In all my years of recruiting,” Natalie says, “I have never had anyone who rejected an offer show up that way. I’ve never had a thank-you note or a gift.”

Candidness can be contagious. Natalie responded to her candidate’s openness by being open herself, giving counsel on possibilities beyond LinkedIn. “Usually, candidates don’t share that they’re negotiating with other companies,” Natalie says. “This candidate was open right off the bat, which let me give him more constructive input.”

Most candidates will come in with their guard up. The best way to get them to open up will be to open up first. Be forthcoming and honest. “Are you having a thoughtful conversation with a candidate,” Natalie asks, “to make sure they are making the choice that’s best for them?”

You can have an amazing influence on someone’s career path without ever having them come to work for you.

There was, in this exchange, also a powerful lesson in graciousness. Candidates who accept jobs are rarely as courteous and thoughtful as this one. Which certainly made this gesture stand out. Both Natalie and the hiring manager agreed they wouldn’t hesitate to consider the candidate again in the future.

That same courtesy and attention to detail can also work to your advantage. “Think about how you are treating candidates,” Natalie says. You want to communicate quickly, courteously, and honestly with candidates, no matter where they are in the hiring journey, but particularly in the final stages. Thank them for their time and, where pertinent, the opportunity to meet them. And give them the gift of your counsel, experience, and viewpoint.

You never know which ones will return your consideration the next time they’re looking to make a change.