When Cognizant’s AI team asked the head of Talent Acquisition to hire more data scientists, they were surprised by the answer they received: No way. The company wasn’t willing to pursue data scientists because the competition was just too fierce.

For Johnny Campbell, cofounder and CEO of SocialTalent, this is a prime example of a company winning the war for skills — not fighting a futile war for talent.

“They saw this challenge and they said no, that’s just not winnable,” he says. “Let’s rethink how we solve this problem. And they’re nailing it.”

Quick history lesson: The phrase “war for talent” entered the recruiting lexicon in 1998 after McKinsey published its seminal paper of the same name. In the current competitive talent market, it might seem more relevant than ever. But Johnny says people got it wrong. Bringing in talent isn’t the challenge. It’s finding the right skills. And that’s tough. 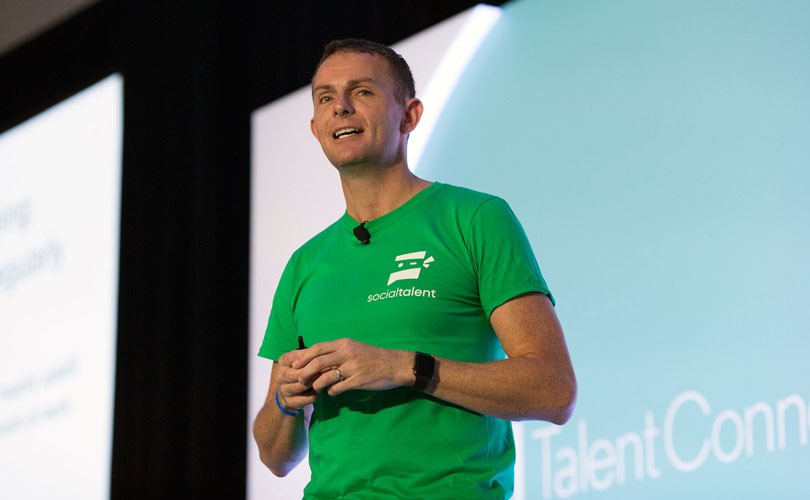 Fortunately, the war for skills is winnable — companies like Cognizant are proof of it. And as Johnny explained in his breakout session at Talent Connect 2018, recent shifts in the hiring landscape are making it easier than ever to win. Here are five changes that may make you rethink your approach to filling the skills gap at your company.

1. Machines are taking over repetitive jobs, both manual and cognitive, allowing companies to move more people into nonroutine roles

You may be sick of hearing about how robots will replace certain jobs. But, according to Johnny, the rise of automation and artificial intelligence (AI) is actually good news for both recruiters and candidates.

“Machines will replace some of the people,” he says. “It’s a good thing. It happens every hundred years in a cycle.”

Most people assume that only manual jobs are being replaced. Johnny argues that that isn’t the case. Both manual and cognitive roles are being eliminated — but only if they’re repetitive.

“It isn’t whether you’re brain or brawn,” he says, “it’s whether the thing you do is repetitive. And repetitive jobs are being replaced.”

With fewer people needed to handle these repetitive jobs, candidates are free to explore more dynamic, exciting, nonroutine roles. For companies, this is an opportunity to reorganize teams and shift displaced workers into roles where they can further develop existing skills or learn new ones to fill organizational skills gaps.

2. The gig economy means more and more workers are looking for short-term assignments

Once upon a time, many candidates would accept a job out of college and stay with the same company until they retired. Today, that’s happening less and less often. In fact, a recent study found that 50% of organizations reported an increase in the use of contingent workers over the last five years.

But for Johnny, this shift is an opportunity, not a loss. And both candidates and companies can benefit from it.

The gig economy now has millions of workers, many of whom are between full-time jobs but some of whom actually prefer the flexibility that comes with short-term roles. As a cab driver once put it to Johnny, it’s a way to “control your own destiny” without being tethered to a single job or employer. And this shift toward temporary contracts offers employers the flexibility to fill their skills gaps with outside help.

“In a war for skills, where you just need skills to do things and they’re going to change fast, you don’t need people to be full-time,” Johnny says. “You might bring somebody in with skills for a little bit, and then they deliver the outcome, and then they leave the team. They might come back in six months when you need those skills again.”

3. The rise of the side hustle is opening up a whole new market in which to find valuable skills

Since the advent of the internet, it’s become increasingly easy to have a side hustle — something you do in addition to your regular job to make a little extra cash. Some people sell their artwork. Others share their expert advice. One of Johnny’s colleagues buys and sells items online for a profit.

But for many candidates, the side hustle isn’t just about bringing home the bacon. It’s about staying relevant in a changing job market and having a contingency plan.

“They create side hustles as the hopeful future platform for a different career or job,” Johnny says. “They’re thinking, I might hedge against my current job. I’m not ready to jump just yet, but I might do 10 hours [a week] and then maybe 20.”

Today, it’s possible for candidates to transition the side hustle they’re passionate about into a meaningful new career. For smart companies that treat these side gigs as a legitimate form of experience, this is an opportunity to find candidates who both have the essential skills the organization needs and are willing and able to learn new things. Speaking of which …

4. Learning is becoming a more level playing field, creating opportunities for candidates from all walks of life

The best thing about a side hustle is that anyone can have one. Today, anyone can open a web browser and learn a new skill.

“We live in a world where people are self-taught online, and they swap out their skills regularly,” Johnny says. “Skills are very, very mobile, and individuals are constantly going to upskill themselves.”

The majority of candidates are willing to invest their own time, energy, and even money to learn new things. And their options are vast, ranging from YouTube tutorials to professional online classes through platforms like LinkedIn Learning. This democratizing of learning has opened up new avenues for candidates from less privileged backgrounds to compete for exciting jobs.

“Learning shouldn’t be something that you have to go to a fantastic university and be from a wealthy family in a modern, developed country to get,” Johnny argues. “If you have an internet connection, you should be able to get the learning of somebody else.”

The end result of all this learning is a wider talent pool for recruiters to turn to when their organization is short of skills. It can also deliver the added bonus of more diversity of thought.

This is already happening and recruiters need to rethink how they search for candidates to take advantage of new educational models. Take software development. In a 2018 survey, Stack Overflow found that 86.7% of software developers taught themselves a new language, framework, or tool without taking a formal course.

“That’s a really big skill,” Johnny says, “and we’re all paying lots of money trying to find great engineers. They don’t go to school to be engineers — 86% of them say I taught myself by just finding stuff online. And that is the future.”

5. Organizations are realizing that their primary goal should be to solve problems, not to fill roles

In a recent report from Randstad Sourceright, 78% of talent and C-suite leaders said the goal of their talent strategy is to have a measurable impact on business performance — up from 57% in 2016.

“We are seeing this in organizations,” Johnny says,  “the alignment of talent with the business objectives. You shouldn’t have different objectives!”

Without this alignment, it’s impossible to win the war for skills. After all, the ultimate goal of the talent team is to bring in the skills the organization needs to thrive, not just to bring in more people.

“Think less about talent acquisition,” Johnny advises, “and think more about talent. Just talent. Because acquisition is just one of the things you can do around talent.”

Johnny argues that organizations, by adopting this new skills-centric mind-set, can build better teams rather than simply growing them. This will involve moving people between functions for short periods to solve the shifting challenges the business faces.

Johnny recommends that when you do hire, hire for learning quotient (LQ). This will ensure the company is filled with people who can quickly adapt to meet new challenges. He points to tools like Pymetrics, which can help you test for LQ by building a profile of a candidate’s soft skills based on the results of 12 games they play.

“Learning quotient — those base abilities — will, I think, become the thing, rather than looking for experience,” Johnny says. “I much prefer this world where anybody from any walk of life can play 12 games and have an equal chance of an interview as somebody else who achieves an equal outcome on those games.”

The talent market is changing. Candidates are learning new things, approaching work in different ways, and breaking down the barriers that might once have prevented them from getting the job they wanted.

And if companies want to keep up, they need to start thinking about how they’ll structure, restructure, and upskill teams to meet the challenges of tomorrow. Because it’s not just about hiring anymore. It’s about harnessing the skills you need in whatever way makes the most sense at that moment in time.