Imagine you were trying to convince someone like Bill Gates, Sheryl Sandberg, or Elon Musk to join your company (just go with me on this). Knowing that they’re busy people who must be inundated with messages, the vast majority of which they don’t read, you wouldn’t dream of sending them a boring, templated, predictable email. No, you’d pull out all the stops to grab their attention and, hopefully, make them want to respond.

Now think about the last amazing candidate you reached out to. They might not be a big shot yet, but they could be in the future. And a creative, unexpected message is still one of the best ways to pique their interest and encourage a response. Showing you went the extra mile can instantly warm candidates up to you, all while making your message stand out from any others they might have received.

If you need a little inspiration, check out these five recruiters and companies who have taken their cold outreach efforts to new heights.

1. The recruiter who wrote a message entirely in haiku to grab the attention of a poetry-loving developer

Sourcing guru Mike Orrantia is a big believer in the power of personalization. He always takes the time to research a prospective candidate’s interests before reaching out.

“For every person I decide to reach out to, I look through simply-searchable, publicly available social media,” he explains in a recent post for SourceCon. “I do my best to make the most creative cold reach out they’ve ever had, and probably ever will have.”

A perfect example of this is the message Mike once sent to a Javascript developer who was an active member of the local poetry community in his spare time. Despite knowing very little about poetry himself, Mike took the time to compose his outreach message entirely in a form of poetry he did know — the haiku. 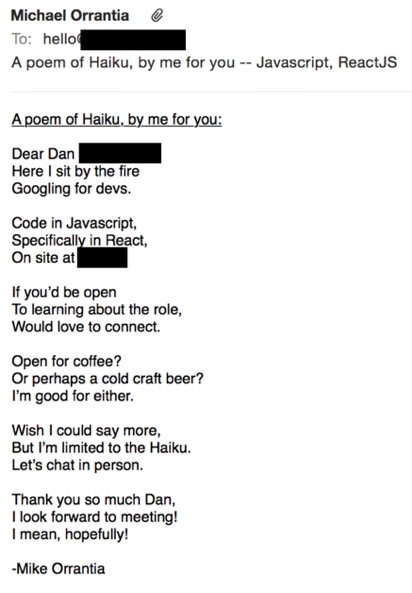 It took the candidate a few days to respond, but the message immediately made an impression on him. The very next day, Mike’s boss noticed an interesting tweet from the developer.

When the candidate later replied to Mike, he elaborated that he’d like to be considered for future openings. He also emphasized that the message really stood out to him, so much so that he shared it among his coworkers.

Mike says seeing this kind of response makes the job more fun and rewarding, so it’s definitely worth the effort.

Putting a spin on a classic format like email can immediately make a candidate’s ears prick up. It takes a little extra time to put in the research and write a completely non-templated message — but candidates will see that effort and respond to it.

2. The Googler who referenced all the candidate’s skills and interests (including talking like a pirate) in their message

Sometimes, it just isn’t feasible to craft a wholly new message for every single candidate. But you can still make a template unique and interesting by plugging in a little information found on the candidate’s social media profile.

Google’s Weston Fillman proved this with his hilarious message to an Australian programmer named Paul Fenwick. Weston filled his template with references to the candidate’s specific skills, like system architecture and Perl. But he also highlighted some of the weirder skills and experience listed on Paul’s profile, like Nyan Cat costumes, talking like a pirate, and telling people on the internet that they’re wrong.

The programmer apparently received a lot of messages, most of them very generic, so it took him a while to notice. But when he did, he was so impressed that he tweeted about it — prompting Weston to respond that he was still up for that chat. 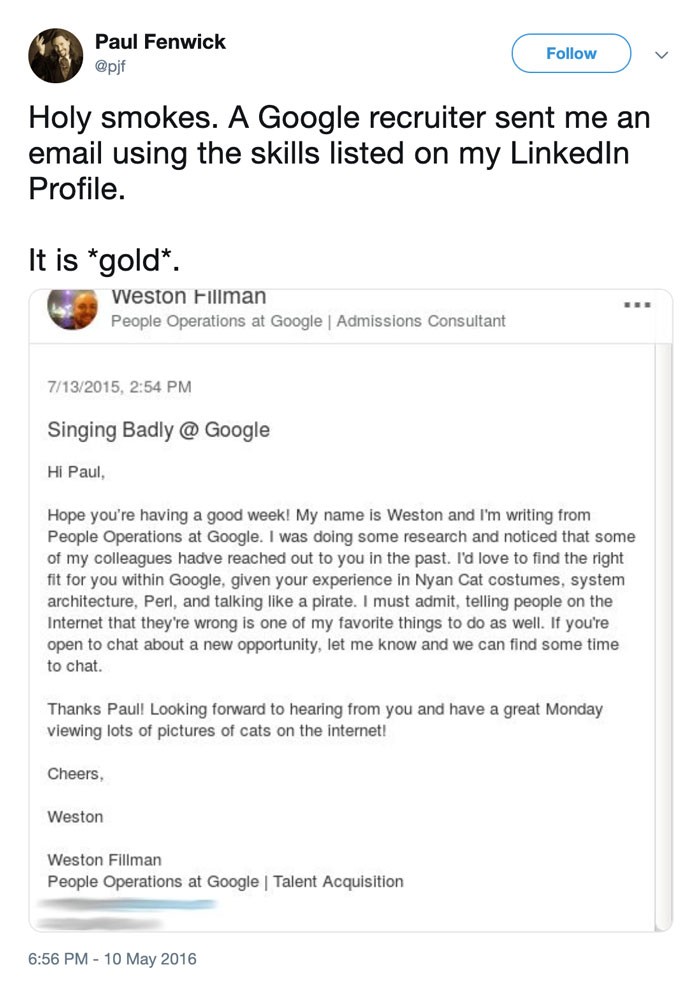 “I sent [the email] to Paul in a creative effort to get in touch and play off his apparent sense of humor which was found on his LinkedIn profile,” Weston tells Quartz. “It took him almost a year to respond, but I’m glad he did.”

Paul didn’t wind up at Google in the end, but his response shows that candidates really appreciate the effort that goes into personalization. Just a few facts pulled from their LinkedIn profile instantly shows that you’ve taken the time to read it — increasing the likelihood that they’ll respond.

3. The Spotify recruiter who sent a “Join the Band?” playlist to prospects with a message hidden in the song titles

Being a music streaming platform, it’s no surprise that Spotify uses music in its recruiting efforts (like this fun offer letter disguised as a playlist).

One former Spotify recruiter, André Hellström, developed a particularly clever outreach strategy in 2016 while he was searching for software developers on sites like Github. André knew that these professionals tend to listen to music while they work, so he sent them a link to his “Join the Band?” playlist.

At first glance, it seemed like a weird playlist, containing everything from the Swiss heavy metal band Knonkus to the soft jazz piano of Péter Sárik to the ambient techno stylings of Aphex Twin. There was even a 10-minute track from something called the Business Success System that sounds like an infomercial.

But if a candidate looked closer, they’d see a message hidden in the song titles. This message introduced André (who is a “ninja headhunter, believe it or not”) and asked whether the candidate was happy with their current job situation, before describing the skills the company was looking for. It ended with a call to apply: “Show me you are passionate — I’ll show you Spotify.” 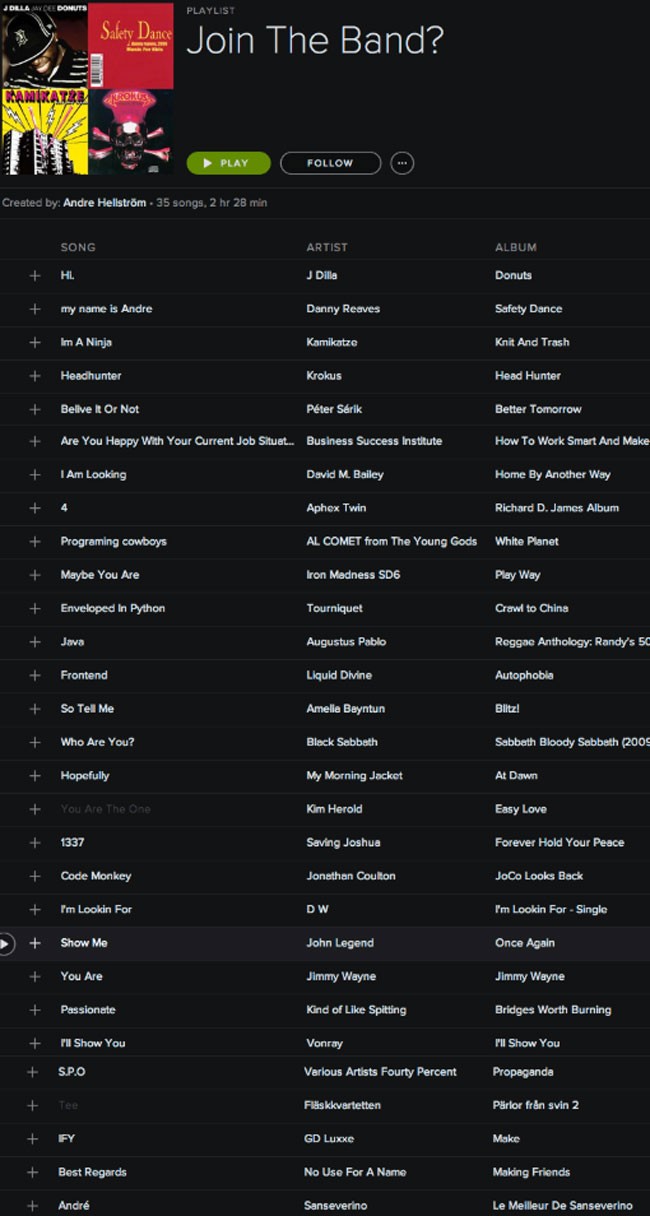 Using your company’s own product or service as part of your outreach is a great way to connect your message back to your overall mission. This will be easier for some companies than others. But if you can find a way to convey your unique employer brand voice in your message, it will stick in candidates’ minds and increases your chances of a response.

Since the goal of cold outreach is typically to get a candidate on the phone, one Dubai-based ad agency, FP7, decided to take the phone to the candidate. Hoping to attract the region’s top creative talent, the company mailed “poaching phones” to candidates working at other agencies — all cleverly concealed within fake professional development books. 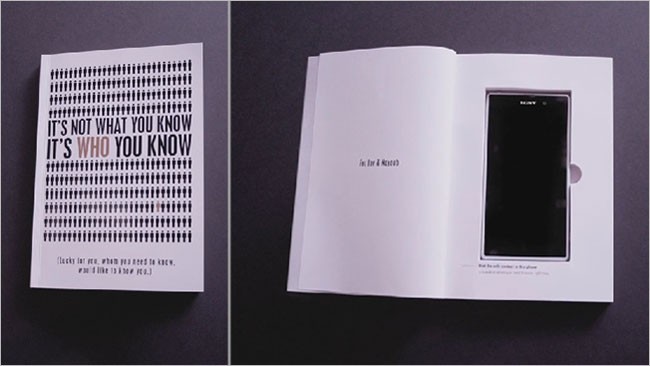 The books were professionally made and looked legitimate. They were also individually personalized to match each candidate’s interests, helping to ensure the receiver would open them.

One book, designed using Coke’s signature font and color scheme, was titled “Creating Campaigns for the Coolest Brands on the Planet.” At the bottom in small font, the subtitle revealed the true goal of the book, stating that the title “is what we’d like to give you the chance to be doing every day.” Another was called “Getting Into a Top Advertising Agency Is Easier Than You Think,” with the subtitle noting: “If you’ve got talent, (and we think you have!).”

When the candidate opened the book, they’d find a cell phone nestled inside the hollowed-out pages. Each phone was programmed with the personal phone number of FP7’s executive creative director.