“If you don’t have the data, it sounds as if you’re doing what? You’re making excuses,” Glen says. “You have nothing without data.”

2. Identify bottlenecks and remove constraints to expand your team’s capacity

Your team’s ability to achieve its goals also depends on its capacity. This goes beyond the size of the team alone. Supply and demand for talent in your area, the success of your employer brand as a recruiting tool — factors like these can all affect your team’s capacity. And if your sourcers and recruiters are responsible for additional tasks like scheduling interviews, their capacity will be reduced.

Glen was thinking about how to solve team capacity issues when reading Eliyahu M. Goldratt’s management-themed novel The Goal. The book deals with a manager at a struggling production plant trying to turn operations around by identifying and eliminating bottlenecks.

Glen realized that the same techniques could be applied to the hiring process, since hiring is essentially human capital supply chain management. By removing constraints, your capacity can skyrocket. 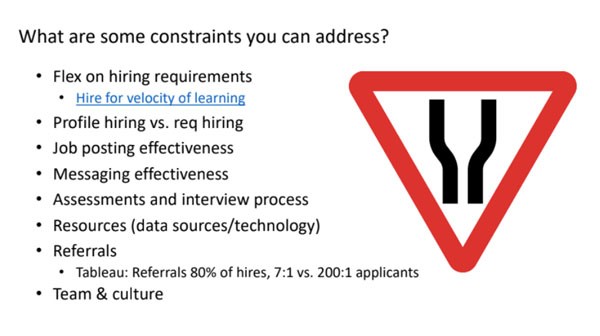 Take hiring requirements. If the hiring manager is asking for candidates with a highly specific, in-demand, and trainable skill that forces the recruiting team to jump through hoops, try removing that requirement and training the person later. You’ll find more qualified candidates — and you won’t have to pay as much.

You can also try hiring for a broad profile, rather than for a list of specific requirements and skills. By removing the unnecessary constraints of a strict requirement list, you’ll be able to fill your pipeline with more talented and capable candidates faster.

In some cases, removing constraints is less about figuring out what’s not working and looking at what is. Glen points to Tableau, a software company that discovered its conversion rate for referrals was 7:1 — compared to 200:1 for outside applicants. Today, 80% of Tableau’s employees come through referrals, because this is the path of least resistance.

Other constraints you might be facing include ineffective job postings that aren’t attracting the right people, and assessments that inadvertently screen out capable candidates. Remove the constraint to see what happens — then measure the results.

3. Improve your team’s process and productivity by shifting the focus from end goals to individual tasks

According to Glen, a big constraint that could be holding your team back is the team culture itself. If someone is comfortable only making one or two hires per month, they’ll only put in the effort required to achieve one or two monthly hires, because it leads to a certain mindset. This isn’t necessarily bad, but it can hurt productivity, reducing the desire to excel — and preventing the team from working well together.

“You can’t have team chemistry unless everybody agrees to a certain standard of excellence,” says Glen. “High performers do not like low achievers and vice versa.”

A better approach, says Glen, is to focus less on the hiring target itself and more on the actions that will make achieving that target possible. When the entire team is focused on performing their daily tasks to an exceptionally high standard, they will ultimately find themselves working toward the same goal in perfect harmony.

This philosophy is held by Nick Saban, legendary head coach of the University of Alabama football team. He famously doesn’t look at the scoreboard during games, expecting every player to instead focus on flawlessly executing each individual play. His stellar record speaks for itself. 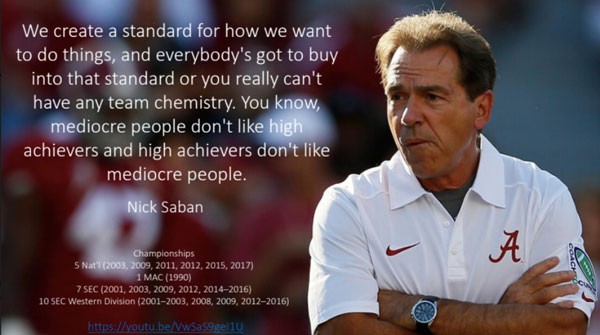 “Objectives are ambitious,” he says. “They should be somewhat uncomfortable. The key results are absolutely measurable.”

In the example above, if you always get two hires per month, you might up your goal to four. And it’s okay if you sometimes get three. Your goal should inspire you to keep pushing — and to strive for excellence on a task-by-task basis.

“If you’re setting targets for the folks on your team or even for yourself, for offers or for hires or for interviews, I’d argue that you should even go up higher than that in the funnel,” Glen says. “It comes down to daily activities.”

Since OKRs are set by individuals and not by leaders, who might be less aware of the day-to-day demands facing the team, they allow a data-driven, bottom-up approach to setting goals. This eliminates situations like being asked to hire 100 people in 90 days.

“Imagine you have 10 people,” Glen says. “You collect all their OKRs — you should be able to add up their hires into what the team should be able to produce. And at the end of the quarter, you can say did we hit it or not? And if we didn’t, why didn’t we? Maybe we have to readjust.” 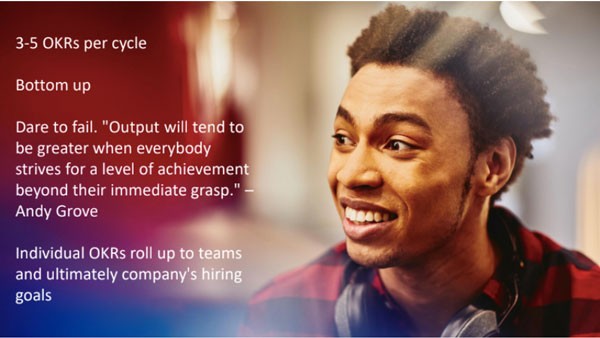 Glen also recommends making your OKRs public. This can be scary, but it’s a great way to motivate your team.

“I think the public aspect holds everyone accountable, and you should be proud of what you’re trying to achieve,” he says. “And if you’re not proud, then you may not be pushing yourself as much as you could. You may be capable of more — why not see what you’re truly capable of?”

Final thoughts: a checklist for success

Getting started can be tough. Luckily, Glen has a checklist to help you out.

“Calculate the capacity,” he says. “‘Start simple. Share the data — make it public, share it with executives. Experiment with the calculator. Take the exercise of figuring out where are the constraints in your system and systematically remove them, because it will totally change the capacity of your team and your ability to hit different hiring goals. And investigate OKRs.” 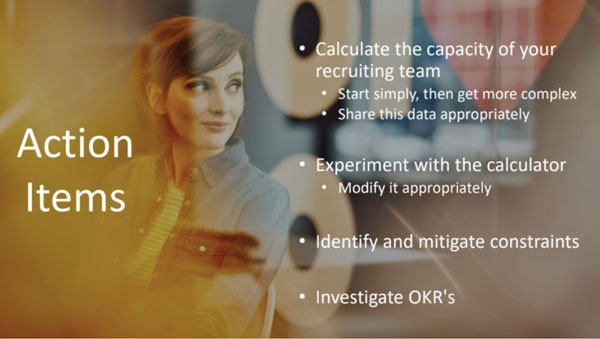 Glen’s biggest piece of advice, though, is to be ambitious. At first, your goals might seem too difficult — but they’re possible, and other teams out there are achieving them.

“I recommend you to push folks on the team, stretch them a little bit,” Glen says. “The OKR model is a little bit interesting — to say, how can we stretch people beyond what they think they’re capable of doing? Not to break them, but to unleash their potential. We’re not trying to break people down; we’re trying to lift people up.”