We recently reviewed thousands of company profiles on LinkedIn and one finding made us pause. 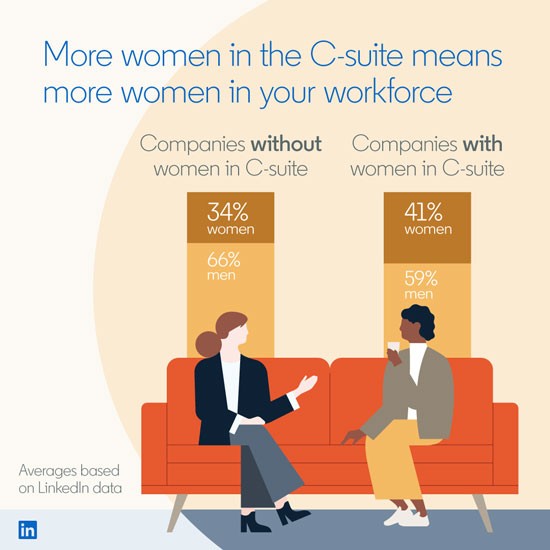 Other studies have discovered a correlation between the number of women in leadership roles and an increase in the company’s profitability and reputation.

The takeaway: investing in female leaders pays off.  And in today’s day and age when 78% of talent professionals report that diversity is a top priority for their company, establishing gender balance in the C-suite and beyond is becoming crucial. To help kickstart your strategy, we put together three ways companies can attract and hire more female leadership, along with some key examples of companies doing just that.

1. Use the Rooney rule to pave the way for more female board members

Here’s something to think about: at the rate we’re going, the U.S. won’t achieve gender balance on company boards until 2055 – but more diverse boards tend to perform better, as they’re more likely to mirror the diverse makeup of their customers and corporate employees. Experts like Anna Beninger, senior director of research at Catalyst, tell it like it is: “In order for boards to appoint more female CEOs, there first have to be more female board members to vote for them.”

You can speed up that 2055 projection, and combat the tendency to select non-diverse board members, by applying a form of the Rooney Rule — a rule instituted by the NFL requiring teams to interview at least one minority candidate for an open head coach or general manager position. Major corporations like Microsoft, Costco, and most recently Amazon, use this type of process for board selection, pledging to consider at least one woman or minority candidate whenever there’s a vacancy. And since BBVA adopted the Rooney Rule into their hiring and promoting practices, almost 40 percent of the new appointments to key roles have been women.

2. Embrace work flexibility as part of your company culture

People can’t be everywhere at once. And that’s a hard fact to overcome when you’re trying to be the best employee, executive, parent, significant other, friend – the list goes on. Try building the ability to have a flexible schedule into your company culture to promote a healthy balance between work and home life. In doing so, you’re instilling a true company value that allows all employees equal opportunity to reach leadership level without sacrificing personal gains.

Women in particular stand to benefit from this – we found that women are 22 percent more likely than men to cite flexible work arrangements as a very important factor when considering a job, with women ages 36 to 45 being most likely to do so. And what’s good for employees is good for business too. According to a recent study by Stanford Graduate School of Business, when employees were given the ability to work outside the office, it had a significant impact on productivity and employee retention.

Sometimes, for flexwork to “work” you have to get creative. Nearly half of Humana’s staff work remotely at least some of the time, but their call center employees couldn’t take advantage of this policy because calls could only be recorded at their desk. Rather than ignoring the issue, Humana stepped up and launched a pilot program last year that provided call center employees with at-home technology that let them enjoy the benefits of flexwork too. PwC been working at it for 10 years, and now has a culture of “everyday flexibility” that allows employees to work where and when they choose.

A great way to build up your female leaders is through mentorship and hands-on development. But in the era of #MeToo, it seems that men, especially senior-level leaders, are becoming less willing to meet one-on-one with women. In fact, a survey released by Leanin.org and Survey Monkey found that 60% of male managers now say they’re uncomfortable mentoring women — a 33% increase from last year.

With anti-harassment identified as one of the four trends impacting HR and talent acquisition in 2019, it’s clear that the #MeToo movement has pushed the topic into the spotlight. But Sheryl Sandberg says it’s time to do more: “It’s really important not to harass anyone, but that’s pretty basic. We also need to not be ignored.” Some companies are already taking action to combat any feelings of concern by addressing cross-gender connections head on. Sodexo, for example, developed a formal year-long leadership and mentorship program that emphasizes cross-gender and cross race/ethnicity connections among junior staff and managers.

Beyond one-on-one mentoring, the Harvard Business Review found that to reach those executive positions, women need to have a close circle of reliable female contacts, and companies can have a hand in helping develop those connections. Bank of America’s Women’s Executive Development Program, for example, began as a one week, in-person event almost 10 years ago, and has now expanded to a 10-month experience that includes assessments, development sessions, and executive sponsorship.

At LinkedIn, an employee-led effort called WIT (Women in Tech) challenges the gender imbalance among software engineers and other technical roles. Led by a group of female tech executives, the group is committed to attracting the best women to join the team and become mentors and role models for the next generation of talent.

These ideas are just the tip of the iceberg. Working with women’s colleges and professional organizations to source potential leaders early or creating referral programs that focus on female candidates are two more ways to get more female leadership in your workplace. And these tactics are working – in fact, the Fortune 500 has more female CEOs now than ever before – but to find true gender parity, we need more than 33 females in the driver’s seat. With women ready and willing to shift the gender balance at the executive level, the next step is to provide these professionals with the tools and support to make it happen.

[ad_1] When it comes to hearing about new career opportunities, women are just as interested as men. LinkedIn’s recent Gender Insights Report revealed that 88%…