Brendan notes that AI and other technology have made finding names of possible candidates and other professional information easy. “If you can spend the time doing the legwork, intelligently, to harness this information,” Brendan says, “you’ll be able to differentiate yourself in your sourcing and in your outreach.”

Here are his top three tips for nailing sourcing and outreach:

1. Do the research to make sure you’re reaching out to the right person at the right time

The legendary showman P.T. Barnum said: “I don’t care what you say about me, just spell my name right.” The standard for a successful outbound InMail is somewhat higher, but it does start with getting the name right.

Brendan remembers getting an outreach message addressed to “Brandon.”

And in addition to getting the name right, you have to look for ways to personalize the message.

For example, Brendan once heard from another recruiter who said their hiring manager thought Brendan would be a good fit for an open position.

In a talk at Talent Connect 2018, recruiting leader Stacy Zapar, founder of The Talent Agency, said she always starts by looking at a candidate’s LinkedIn profile. “Whatever stands out to me at first glance,” Stacy says, “that’s what I talk about in my outreach. . . . Just show them that you actually read their profile and that your message is intended only for them.” Stacy has collected a list of ways to personalize a note: 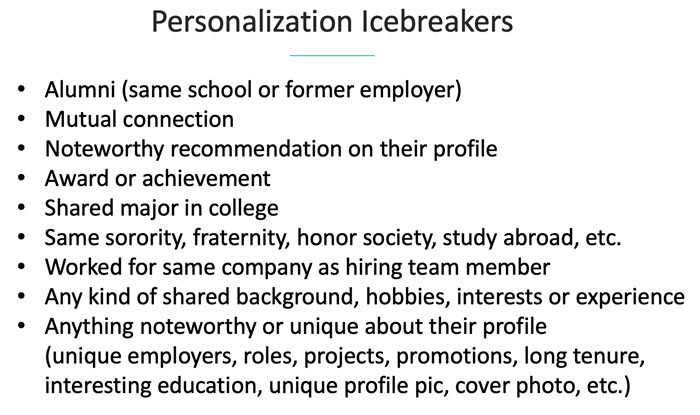 Your outreach message is a chance to make a strong positive first impression so do the groundwork to get it right.

2. Use data and AI-driven information to increase the chance of a positive outcome

Brendan acknowledges that he and his team make mistakes too. He remembers when his team reached out to an engineering candidate who in turn emailed an engineering friend at LinkedIn. “That engineer walks over to our recruiting team,” Brendan recalls, “and asks, ‘What the heck are you doing reaching out to this person this way? Don’t you know I have a relationship with them?’”

The recruiting team would have known if they’d taken the time to do the necessary research and had the LinkedIn engineer reach out for them. And they would have been much more likely to get a response.

Brendan encourages recruiters everywhere — not just on his team — to use LinkedIn’s Spotlights to identify candidates who are more likely to respond to your outreach and who are already inclined to want to work for you.

These filters on Recruiter can show you the candidates who have previously applied to your company, have first-degree connections with your employees, or have engaged with your talent brand. Putting these Spotlights to work, Brendan says, can boost your response rate 3x. You can also check on Recruiter to see if a candidate has said they are open to new opportunities.

Brendan says that spending the extra time to differentiate both how you communicate and with whom you communicate will be “guaranteed statistically” to improve your outcomes and raise your credibility with your hiring manager.

3. Get your hiring manager involved in your sourcing

A strong case can be made for the importance of fully engaging your hiring managers in each recruiting effort.

“I have no issues with hiring managers sourcing,” Brendan says. “Frankly, I’d rather have them do their sourcing.”

When he’s finding candidates, Brendan says the perfect arrangement is for him to come to the table with a list of candidates whom he has already vetted — “I understand who they know and who has validated them, who has interviewed with us in the past” — and turn that list over to the hiring manager with a simple request: Please reach out to them.

Brendan knows that an engineering candidate, say, is more likely to respond to an engineering executive’s outreach than to his. eBay’s recruiting team found that outbound InMails from a hiring manager had a 40% response rate versus a 12% response rate for similar messages from recruiters.

John Vlastelica, the founder of Recruiting Toolbox, has a similar example of the value of bringing in hiring managers for sourcing. In a top-rated talk at Talent Connect 2016 called “Leveraging Hiring Managers as Your Secret Recruiting Weapon,” John noted that when Yahoo was in hypergrowth mode, recruiters pulled managers in for sourcing sprints. They found that not only were candidates more responsive to InMails from hiring managers, but the process opened a window for managers to see how the recruiting team worked.

“Whatever you can do to involve your hiring manager,” Brendan says, “does nothing but increase your chance of a great hire and raises your credibility as a recruiter and a partner to the business.” And the same goes, of course, for doing the legwork that allows you to reach out to the right candidates with the right message, rather than legions of undifferentiated candidates with a generic message.

It’s all about quality over quantity.

Talent on Tap is a biweekly series in which Brendan Browne breaks down the hottest topics, biggest challenges, and most enticing opportunities in the world of talent. Talent on Tap will also give you an opportunity to hear from other organizational leaders, subject matter experts, and thought leaders in the space. Stay tuned for the latest.