But while there is near unanimity about the significance of soft skills, there is no consensus about how to evaluate them. One reason for this is that there are some myths about these elusive skills that are holding many companies back from assessing them effectively and can even lead to unconscious bias in hiring.

To help you separate the fact from the fiction about soft skills, we spoke with Kristen Hamilton, Cofounder and Former CEO of Koru, which makes predictive hiring tools that help companies reduce bias and systematically measure the soft skills that matter most to them. Kristen also also shares some tips about how to measure these skills more effectively and consistently.

Myth No. 1: The more soft skills, the better

It’s easy to assume that candidates with more soft skills automatically make better employees. But that isn’t true for every role.

“It’s not the case that just more of everything is better,” Kristen says. “It can actually go the opposite way. The factors that drive job performance in a given job are unique to that job.”

A good blend of soft skills can sometimes make for a more well-rounded person — and that might be what you’re seeking for some roles. But while all soft skills are useful in certain situations, they have the potential to hurt job performance in others.

Since every role calls for a different mix of soft skills, it’s important to define exactly which skills matter most to you before you begin assessing candidates. This can vary drastically from role to role and from company to company and will depend on a firm’s core values and priorities.

Myth No. 2: Assessing soft skills informally is better than not assessing them at all

While the vast majority (80%) of talent professionals LinkedIn surveyed says that soft skills are increasingly important to company success, less than half (41%) have a formal process in place to assess them. And 68% say they evaluate these skills primarily by picking up on the social cues a candidate displays in interviews.

The logic seems sound: Assessing soft skills in any way, even if it’s somewhat informal, must be better than not assessing them at all.

But this isn’t necessarily true.

Without a formal process in place, these assessments are rarely accurate predictors of job performance — which may explain why 57% of talent professionals report that they struggle to assess soft skills accurately. What’s more, an informal evaluation invites unconscious bias into the process.

“We tend to like someone because they’re like us in one way or another,” Kristen explains. “That happens really quickly in an interview. You might say you like them because of some soft skill. But, no, it’s because of some affiliation or connection — which is really problematic because that means you hire a lot of people like you. That connection probably has nothing to do with whether somebody can perform or not.”

First-impression bias affects everyone, whether they realize it or not, and it can be hard to spot in the moment. Say you immediately take a shine to someone because they went to a prestigious school. Your brain might justify that preference by chalking it up to something like “leadership potential.” But if you don’t have a way to objectively measure that person’s leadership, it’s impossible to tell whether your first impression is justified or you’ve fallen victim to unconscious bias.

To reduce bias throughout the hiring process, you should run all assessments as systematically as possible. This ensures that every candidate gets an equal chance to prove their skills, while also providing objective, comparable data that you can rely on when it’s time to make a decision.

The data may make you reconsider your first impression. Or it may confirm a gut feeling you had about a candidate who doesn’t seem to fit the mold. Either way, you can feel confident in your decision when you know it was grounded in evidence.

“The stories I love are when a recruiter will talk about this candidate that they feel really good about, but they don’t check the usual boxes,” Kristen says. “Then they use the fit score and they say, ‘Look, the data shows that this is a good candidate. I know it doesn’t look and feel like others we’ve seen before, but it’s not just my gut: I’m actually supporting my gut with data.’”

Another common assumption about soft skills is that everyone thinks about them the same way. But, again, this is not always the case.

When it comes to soft skills, talent professionals are not all speaking the same language — and this can cause serious miscommunications. What a hiring manager asks for may not be what the recruiter sets out to find, because their interpretation of what a particular soft skill looks like may be wildly different.

A perfect example is grit. What people think of as grit is often not grit at all.

“They assume it’s people busting through walls,” Kristen says. “It’s actually not. It’s being perseverant in the face of ambiguity and even boredom. So it’s that person who’s sitting in the corner with a spreadsheet. It’s not the one holding their hands in the air, charging through the finish line first.”

Soft skills are only a useful hiring criterion if everyone involved in the process is on the same page about what they mean. Whenever you’re discussing what skills you’re looking for in a candidate, be sure to check that the whole team is aligned on the precise definitions of those skills. Giving specific examples of what a skill looks like and how it impacts the job can go a long way to clearing up any potential confusion.

Your company will rely on soft skills forever, so measuring them effectively is a must 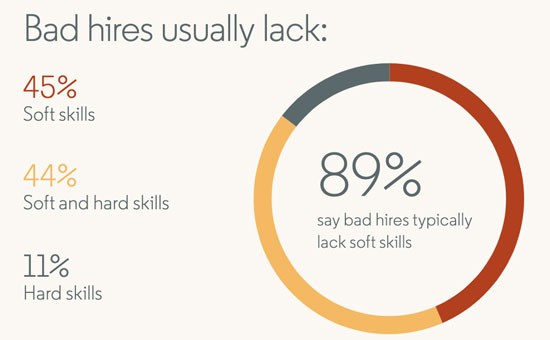 Unlike hard skills, soft skills can be incredibly hard to teach. It’s essential that you know how to spot them — and that you don’t fall prey to the myths that surround them. Luckily, the effort you put into identifying soft skills pays off.

“Soft skills are the foundation that allows workers to transfer and translate what they do into a new job,” Kristen says. “They’ll need to relearn hard skills. But the shelf life of soft skills is forever.”

For more tips around how to hire for soft skills, download the full Global Talent Trends 2019 report.